Catherine Owen lives in New Westminster, BC. She is the author of ten collections of poetry, among them, Designated Mourner (ECW, 2014), Trobairitz (Anvil Press 2012), Seeing Lessons (Wolsak & Wynn 2010) and Frenzy (Anvil Press 2009). Her poems are included in several recent anthologies such as Forcefield: 77 Women Poets of BC (Mothertongue Press, 2013) and This Place a Stranger: Canadian Women Travelling Alone (Caitlin Press, 2014). Stories have appeared in Urban Graffiti, Memwear Magazine, Lit N Image (US) and Toronto Quarterly. Her collection of memoirs and essays is called Catalysts: Confrontations with the Muse (W & W, 2012). In 2015, Wolsak & Wynn published her compendium on the practices of writing called The Other 23 and a Half Hours or Everything You Wanted to Know That Your MFA Didn’t Teach You. She works in TV, plays metal bass and blogs at Marrow Reviews. 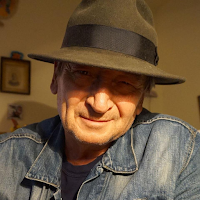 Timothy Shay writes and lives in Vancouver, BC. His work has appeared in many Canadian literary magazines, on CBC Radio and in the Rolling Stone. He has one book, This Cabin as the S.S. Titanic, and several chapbooks, and his collection The Dirty Knees of Prayer (2016) has just been released from Caitlin Press.

Posted by Eileen Kernaghan at 9:00 PM