Latest news from our members

Excellent news from long-time Burnaby Writers' Society member Ruth Kozak. Researched extensively in Greece with the help of Classical scholars, the Greek Ministry of Culture, the Society of Macedonian Studies (Thessaloniki), the Finnish Institute in Athens and the Norwegian Institute of Athens, with also research undertaken in the Gennadius Library and the British Library, the epic SHADOW OF THE LION , Ruth's  the first historical novel, will be published by MediaAria CDM in Summer 2014.

Debra Purdy Kong's third Casey Holland mystery, Beneath the Bleak New Moon, will be released September 17th. To start the launch, she’ll be at Word on the Street, Sun., Sept. 29th, and participating in a mystery panel in the library,
"The Scene of the Crime" from 2:50 to 3:50 p.m.  More info. about the book can be found at www.debrapurdykong.com or at TouchWood Editions site, http://www.touchwoodeditions.com/display_author.php?contributor_id=2383 Debra wishes to extend a huge thanks to Eileen Kernaghan and the Kyle Centre Writers’ Group for helping with each and every chapter about three years ago. The work finally paid off!

S.D. Gale marketed three short stories in May: “Bagpipes to Freedom” in 0-Dark-Thirty; “A Gardener by Choice” in The Storyteller; and “Spectacular Leo” in ideagems. All three stories were to be released this summer. 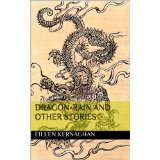 Dragon-Rain and Other Stories, a collection of  Eileen Kernaghan's published SF and fantasy short stories, is now available from amazon sites as a kindle e-book.    Black Bon sorcery in a mythical Himalayan kingdom; a mysterious death at a fashionable London dinner-party; a bleak look at near-future medicine; an apocalyptic North America where the only things left to sell are stones. Here are nine tales of dark fantasy, shamanist rituals, the nineteenth century occult, near-future science and dystopic future worlds. The title story, "Dragon-Rain", appeared in The Year's Best Fantasy & Horror, ninth annual edition.

Congratulations to Bernice Lever, whose poem "Not Wanting an Answer" received Honourable Mention on this year's Federation of BC Writers poetry contest. Bernice's poem will appear in the winter issue of the BC Fed magazine.

Now available at  Smashwords  and  at the Amazon.com  Kindle Store :   Starting a Business and keeping it from the Edge, by John Joyce. This hard hitting book on starting and maintaining a business  is a must read for those preparing to run their own business and a good fun read for those who wish they had.

Dorothy Stott’s third chapbook, The Visitant, has just been published by Beret Days Books (The Ontario Poetry Society). The Visitant, a collection of poems, is dedicated to the ghost of Emily Bronte. “These poems are suffused with melancholy and they evoke cryptic images of mysterious, enigmatic visitors who raise many questions before slipping away… We feel the shadowy presence of the supernatural and we are always seeking to grasp and understand this ghostly element that forever escapes our eyes and our search. This collection of poems is a source of inspiration, displaying all the sensible qualities that most of us would like to possess.” ISBN 978-1-897497-78-4 $10.00

Bernice Lever's poem "Dance on the Days" is now a song composed and sung by Enrico Renz. You can hear the audio on  www.canauthorsvancouver.org   Bernice took part in a World Poetry event March 9: a   Celebration of Chinese Poetry and Poets, at the Richmond Cultural Centre, and  on March 23, Sat., 10 am to 4:30 pm, will co-host the Writers International Network 2nd Annual Festival, a day of awards, dance, poetry and music, also at the Richmond Cultural Centre, 7000 Minoru Gate, Richmond, BC.   Both are free events. Bernice is reading poems, "In Word and Dance",  April 5 and 6. 2013, in Bellingham Wash. at 2 locations.  Nine poets were chosen from 100  submissions, some for reading and some for the choreographers to develop dances for this annual event, at the Firehouse  Performing Arts Centre.